Looking for Cloudways Promo Code 2023? If that's a yes, you are at the right place.

I have negotiated a special deal for you with Cloudways. With our exclusive Cloudways Coupon Code, you will get free hosting credits worth $20. That's almost 2 months of free hosting. So don't miss using this exclusive coupon.

How To Use Cloudways Promo Code 2023

Below are the steps to use our exclusive Cloudways Discount Coupon For 2023.

2. Click on the Start Free button located at the top right corner of the Cloudways home page that opens as shown in the image below.

3. On the next page, you will see a form. Fill up all your details. For the Got A Promo Code option enter our exclusive coupon code that you unlocked. 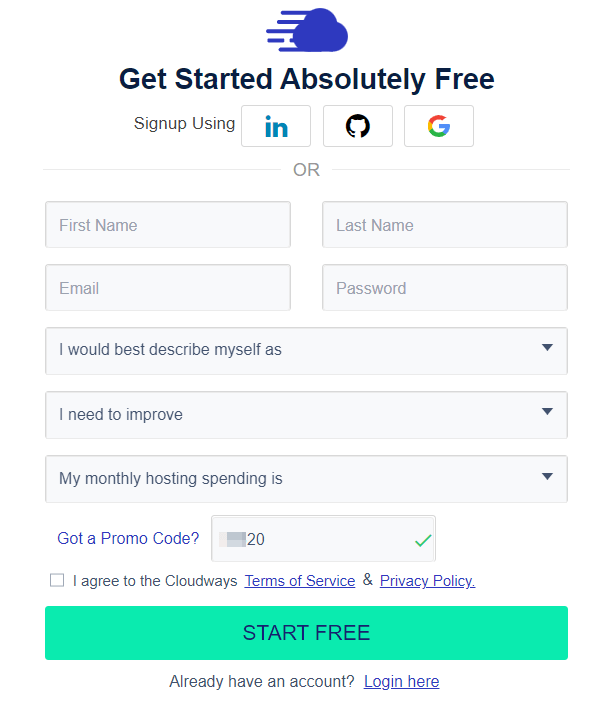 4. Click on the Start Free option to activate your 3 days of free trial to Cloudways.

5. Once you are satisfied with the Cloudways Platform, you can upgrade your plan by updating your billing information.

6. Once the billing information is updated you will get $20 hosting credits in your account. You can use this credit on any Cloudways plan. Your credit card will only be charged when you exhaust this $20 hosting credit.

Cloudways is a Malta-based PaaS provider that procures servers from IaaS Cloud Hosting Providers like Digital Ocean, Linode, Vultr, AWS and GCP and passes them on to you after adding their customized server stack and firewall for performance and security at the same time.

Which IaaS Hosting Provider To Choose At Cloudways?

Cloudways offer you the option to choose between the following 5 Cloud Hosting providers.

Digital Ocean needs no introduction. It is among the oldest Cloud Hosting providers in the industry. Apart from their affordable pricing, Digital Ocean is known for its Premium Servers which are insanely fast. Coupled with Cloudways optimized WordPress stack, it can make your website fly.

At Cloudways, the basic 1GB RAM Server is the cheapest option you can grab. So, if pricing is critical for your business, you can go with Digital Ocean.

Linode is another option that you can get at Cloudways. Some web developers recommend Linode servers over Digital Ocean for their better performance. But that's when we put up regular Digital Ocean servers against Linode. Things have changed drastically when Cloudways started offering Digital Ocean Premium servers as an option.

Vultr has the most number of data centers among the economical options available at Cloudways. They lead with 19 total data centers, just one behind AWS. And when it comes to performance, Vultr high-frequency servers can easily beat Digital Ocean and Linode.

For the above reasons, Vultr is the best option for most people. Of course, unless you are from India. Despite their huge network, Vultr does not have any data centers in India

Amazon Web Services (AWS) is a giant when it comes to Cloud Hosting. They have the most number of data center locations across the globe. However, unlike Vultr, AWS won't be easy on your pockets when you get one from Cloudways. It has Cloudways plans starting from $36.51 to well over $3000K.

Google Cloud Platform (GCP) is another big fish in the Cloud Hosting Industry. Although GCP isn't much behind AWS in terms of data centers with 18 of them across the globe, it falls well short behind it when it comes to scalability. As compared to up to 192 GB RAM cloud servers at AWS, GCP is still stuck at 64GB RAM.

Pros And Cons Of Cloudways

Below are the pros and cons of Cloudways hosting

What's more? If you go with their VPS Bundle for $20/month, in addition to cPanel License and Acronis Backup, you also get Cloudflare pro plan access which itself is worth $20/month when you get it from Cloudflare. The bundle also includes Web Security packages to make the deal sweeter.

If you are looking for affordability with servers optimized for speed, you can go with the Turbo plan of A2 Hosting. The Turbo Shared Hosting Plan offers Listspeed webservers with NVMe storage. The servers are built to perform out of the box.

Below are some of the reasons you should grab our exclusive Cloudways coupon code.

1. Nothing Better Than Free Stuff

With Cloudways you get free 3 days trial without even adding your credit card details. And, once you add your payment details, our exclusive Cloudways Promo Code will get you $20 worth of free hosting credits.

Even when you look beyond the free trial and hosting credits, Cloudways is the cheapest compared to several other Managed Cloud VPS options.

At Cloudways, just like Cloud Hosting Providers, you are charged per hour with an upper monthly limit. So, if you are developer who just needs to spin up a server for testing, you won't be disappointed.

No matter which part of the world you are in, you are likely to find a data center near your target audience.

The IaaS Cloud Hosting providers that Cloudways signed up with, all provide great uptime. On the Cloudways end to downtime due to server reboots and upgrading software is minimal.

How Can I Get Cloudways For Free?

2. Next fill up the form and in the Promo Code section, enter our exclusive Cloudways Coupon Code.

3. Once the signup is complete, you can avail 3 days free trial. However, once you enter the billing details you will get Free Cloudways credit worth $20

I used your Cloudways Promo Code, but I don't see the $20 Hosting Credits. What Should I do?

Can I use this Cloudways Coupon Code on any Cloudways Plan?

Yes, you can use the Cloudways Coupon Code on any hosting plans. You will only be charged once you exhaust that credit limit.

Cloudways is a nice affordable option if you are looking to go for a Managed Cloud VPS. Though their customer is a bit slow, you can expect that with most Cloud VPS at their price point.

Overall Cloudways is a good value-for-money option. And with the Cloudways Promo Code for 2023, it sounds even better. 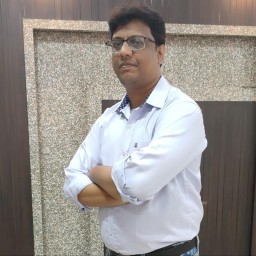 Aquif Shaikh is a Blogger and Web Hosting Expert from Mumbai. He loves writing, traveling, and sharing his knowledge and ideas with the world. At Blogging Ocean, he writes about blogging tips, web hosting tips, content marketing, online business, and SEO.